Skip to main content
Posted by Pete. A.K.A Shenanigans in Japan December 18, 2006

Went to Minowa ski resort again this sunday with Haruna. The weather was looking crap right from the start but this was the only day Harunas mum could look after Jet. So we get there and it was RAINING and not a great deal of snow!! But at least it was pretty warm at around 6 degrees. We managed to get some half price tickets from mates we used to work with there so cost us 2000yen for all day pass. The Snow was wet and slushy and visiblity ranged from poor to really crap near the top of the mountain as you can see in the pic below. 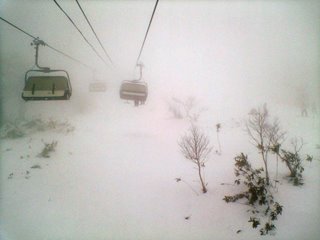 There were still only 2 lifts open and the main steep run was riddled with gigantic mogles that the skiers had carved into the slope. Most of them being up to my waste when went through them. Not at all ideal for snowboarding or for anybody just wanting to cruse down the hill.
Also managed to meet and see some interesting people in the rest house. Including one old fella (about 60ish) wandering around on the wet floor wearing socks and listening/wearing Oakley Thumps!
(if you don't know what Thumps are, they are Oakley's with an mp3 player built into them. Worth around $400-$600 bucks)
Ran into lots of old mates we used to work with and also some students from various company's I teach to. During one conversation with a student, another oldish dude comes up and starts chattin in near perfect English about how he likes to climb mountains all over the world and trains every day doing aerobics and gym etc. Anyway I gave him my email addy and he said hes going to invite me to Nepal next time he goes with his Japan/Nepal association group. mmm yeah Nepal would be sik!!!
So anyway got in plenty of boarding and short skiing, but damn those mogles will kain ya legs!!
(>_<) 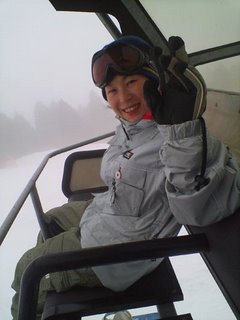