Skip to main content
Labels
Posted by Pete. A.K.A Shenanigans in Japan January 28, 2007 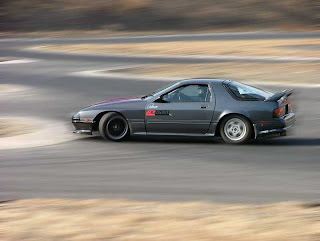 For todays outing I took my rx-7 fc out for a well needed drift. Decided to try SS park at nihonmatsu today as I had been there plenty of times to watch rally or drifting but never driven myself. The track consists of 2 main straghts and lots of long and tight corners to test your drifting skills. Stu and Sammie joined me as my pit crew and co drivers for the day. Normally they would be driving also but their drift cars at parked at Ebisu circuit without rego.
So anyway the day started out well with good sunny weather (considering its the middle of winter) and only about 4 other cars out for a drift. So after paying my 2500yen (about 26 bucks au?) and swapping some tires around I was out for a few warm up laps. After about the 2nd lap the my first glitch of the day happened. One of my tires decided to come of the rim. 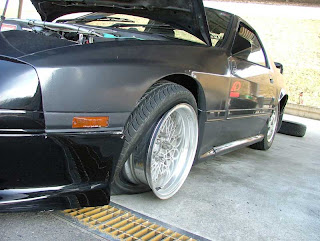 Time for another tire change. Anyway after 10 or so laps I was starting to get the hang of it, then another tire would shed its skin so back in the pits for another change. After a few hours into it I was starting to get pretty confident even though I was now resorting to using stud less snow tires on the back as I had ran out of all my other tires I brought. They are good for snow conditions but on dry tarmac they are slippery as but good fun. 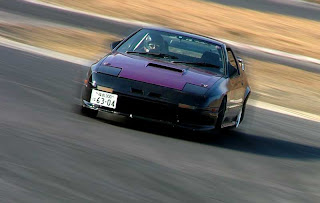 I'm getting pretty confident by now so with Stu as my co driver I was pushing pretty hard. But then trouble struck! after a long drift around the final corner before the main straight I didn't counter steer properly and we went flying into a guard rail ahhhhhh!! We could both see it happening a few seconds in advance but alas there was nothing we could do... 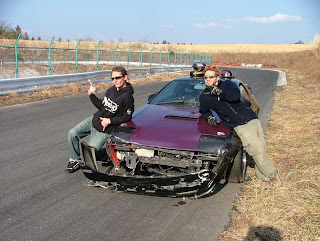 Luckily the engine wasn't damaged so after a bit of hand panel beating by the fellas and removal of unwanted dangling parts we were back in action! Wicked fun!!! but now I gotta fix my car and get some new tires, preferably ones that don't fall off or pop after 2 laps!
Labels: drift ebisu fc3s rx-7 ss park