Skip to main content
Posted by Pete. A.K.A Shenanigans in Japan March 29, 2007

Cleanin up my new ride 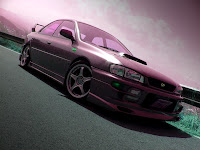 Howdy all! It's been a while since I posted anything cause I been busy workin on the car and hard at it in the gym. So I've pulled off all the graphics from the wrx, which took about 10hrs to complete. It was a real pain the rectum getting the glue off from under the graphics but I think it looks much better and cleaner now. Also ordered a new radiator for it off the internet because the one that was in it was leaking like crazy. I was quoted 65000yen or about $650au at the subaru dealership but found the same thing on the net for 16000yen!!

Anyway with all that done I still wanted to put my dvd player in it from the Daihatsu Max. I was going to get the dudes at the garage to do it but then I thought I would have a crack at it myself. Having never tried pulling out a stereo and installing one I figured it was going to be a mission. And a mission it was. 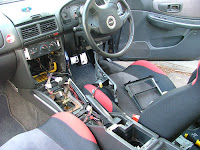 Anyway after a few hours of trial and error I managed to hook up the dvd/mp3 unit, monitor and tv tuner. The finished product looks like this. 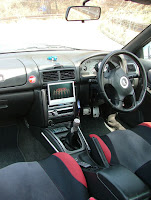 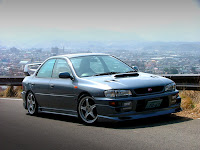 Here she is yesterday looking all nice and clean after a wash and wax. This morning woke up and it had been raining so now the car is covered in filthy shite again.
AAAHHHHGG why bother washing it...