Skip to main content
Labels
Posted by Pete. A.K.A Shenanigans in Japan August 27, 2007 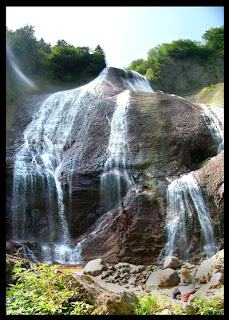 Met up with a mad old fella in his 60's who has climbed mountains all over the world including several peaks Nepal, Africa and lots more. Anyway he was keen to take me Sawa climbing but I had no idea what he was talking about. Turns out that this is waterfall climbing. Anyway after catching up for a chat at his local gym he tells me he's keen to go rollerblading and rockcimbing at the man made wall at Azuma sports park where I often climb. So next morning at 7am!! we head off for a skate for a few hours. 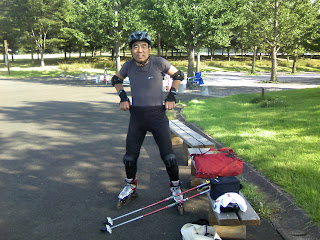 Hiroshisan getting decked out ready for a hard core skating sesh.

After skating and working up a crazy sweat in the muggy heat we headed over to the climbing wall for some more fun. There had been a climbing comp on recently at the wall so all the old routes had been removed and replaced with difficult routes for the comp. I started off with a lead climb on the "easier wall" but even the easy wall was a mission and a half today. Managed to make it to the top, but not without a nice 3m fall along the way. Luckely Hirosan knows what he's doing and was able to belay me very well. 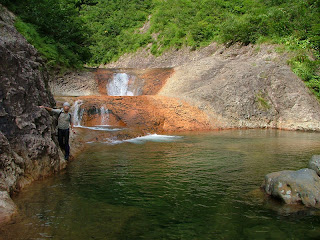 Anyway on to the waterfall climbing. So the next day we were off at 7am again to this amazing river about 1hr drive from my place. Never seen anything like it in Japan before. The water was crystal clear and all totally natural untouched by city council trying to make it more accessible to the masses. Luckely I was able to borrow some river/waterfall climbing boots from my old mate who is the owner of the local hard core out door shop. The boots have felt on the sole's of the boots for grip on wet rock. 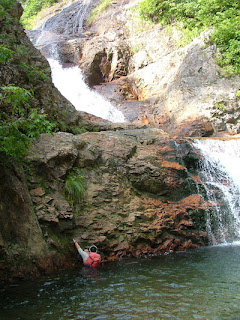 So on we went hiking up the river climbing a waterfall every few hundred meters for a few hours until we arrived at this huge waterfall. Must have been around 100 meters high and a great place to stop for lunch. By this time I was pretty nacked and figured we would be heading back from here. But nooooo this dude has more energy of a 20 year old marathon runner on steroids. He decided to start climbing up the huge waterfall for a while before heading back down and telling me it might be too dangerous without ropes, DUHH! But he insisted that I go up as far as he did for some photos at least. So after some hesitation I made my way up. 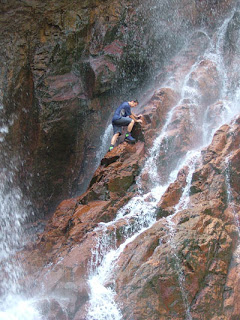 The force of the freezing cold water pounding down was like nothing I've ever felt. Not just that but I couldn't see a thing, let a lone climb up steep slippery rock without a rope. So I climbed up as far as I could pretty much blind most of the way before descending back to safety. 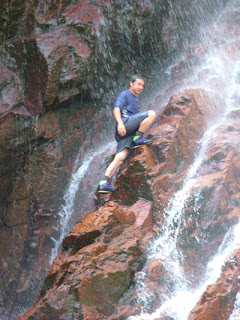 Surly we were heading back now I thought, we've been gone for hours. No! he wanted to get up to the top he said. So he led me up a steep path through the bush that he had made himself a few weeks earlier. The climbing was insane, grabbing at any tree roots I could grab at and ducking under thick bush for long climb. Most of it was really slippery and dangerous, some parts really exposed where one slip and you would be back where we started 100 or so meters below.

The view of the falls and the surrounding valley was pretty sweet at the top, but still we pushed on. Up more and more waterfalls. Some were getting pretty hairy with next to nothing to grab for protection. After convincing him that surly this was far enough and that we still had a long way to get back he decided to break for another lunch before the return trip.

Heading back was just as hard, if not harder than the climb as some parts took everything we had just to get up them and would be impossible to down climb. Luckily Hiroshisan brought a thin 7mm rope, so we made harnesses from climbing tape and a carabina and repelled of some of the worst anchors I've every used. Crappy little tree branches that were almost snapping with our weight. I wish I took a photo of some of them now but I was too concerned about not dieing at the time that photos didn't come to mind.

Anyway after a few hours hiking and repelling back to the start point we dried off and set off for home. Amazing place! Amazing fun!! cant wait to get back there again!!! 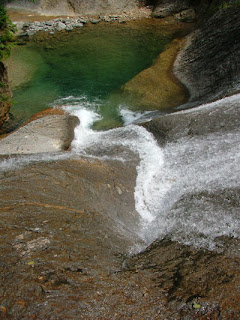