Skip to main content
Posted by Pete. A.K.A Shenanigans in Japan August 05, 2007

Went for another trip to Zao mountain again yesterday but the weather turned horrendous, more on that in a sec. Its summer now so that means festival's and firewoks time of the year again. One of my companies I teach, NOK, had their summer festival the other day so we tagged along for the free beer, food and entertainment. Also the chance to win some sweet prizes including a 32inch SONY LCD tv. Unfortunately it pissed down just as we got there so we stayed indoors for a while until it died down. They had a mini petting zoo there also with donkey's, lama and rabbits but Jet didn't seem too interested. There was a pretty sweet fireworks show at nite and everyone had fun. Didn't win anything tho (>_<)> At least got to drink plenty of free beer and plenty of festival food. 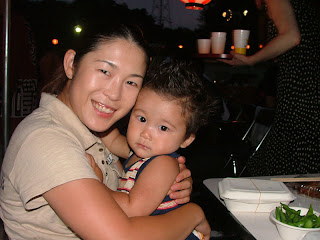 So yesterday we deicided to head up to Miagi prefecture to Zao mountain, a famous place for skiing in winter and one of the Hyakumeizan mountains

(see my other site www.100mountains.blogspot.com for more info)

Anyway just as we got half way up the mountain near the starting point for the short hike to the summit the weather went insaine! 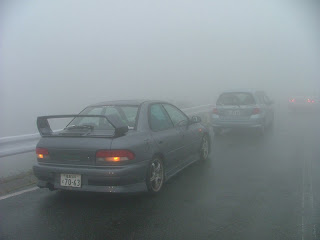 The wind was blowing the clouds across the road faster than I've seen before and visibility was down to about 10m at times. Most cars on their way up decided to turn around and head back down and we did to as there wouldn't have been anything to see in this weather anyway. 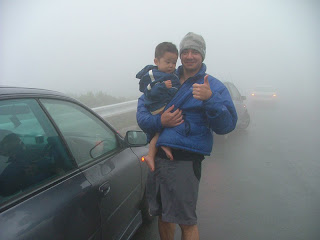 So we deiced to head back down and go to a Hot spring called Gaga onsen. It was over priced and too small. They charged 1000yen for 2 smallish hot springs. I spent the whole time in the outdoor one until and large bee came along and kept following me around until I got out and ran into the indoor hall way in just a tiny hand towel wrapped around my waist to hide the privates. Anyway after we got back into Fukushima a few hours later we headed into town for the Waraji Matsuri (Sandal festival) a traditional festival held each year where a bunch of men carry a huge sandal made of straw from the city up into the local mountain Shinobuyama. It was good fun. I had a few beers and caught up with a bunch of mates. Will upload a vid or two a bit later on.