Skip to main content
Labels
Posted by Pete. A.K.A Shenanigans in Japan July 03, 2010

The Day of Unfortunate Events (and one fortunate event)

It started off in the morning with me at my pc checking comments and photos etc. thinking I had plenty of time still get make my 1hr ride to work. The clock on my PC said 7:50 when Haruna got home from dropping Jet at preschool and said "what are you still doing here?" It was actually 8:30 which put me straight into panic mode. You know how it is.

Then later in the day just as there was an awesome thunder storm brewing and I was getting ready to shoot some lightning which I had been waiting to do for months and months. I decided I would quickly pop down to the ground floor and get myself a coffee as work was just about done for the day.
As I pressed 1 for the ground level in the elevator it suddenly started flashing P with up and down arrows. P for Pete?? Then I realized I had only moved about half a meter down before the elevator came to a stop. I tried all the buttons and the call for help button a few times with no answer. After a while a girl answered who seemed very uninterested in my situation. "Can you get me out of here!? Im stuck in a tiny, hot and stuffy elevator!" She said ok just hang on and I'll get back to you. After 20mins or so with no reply from the girl I could hear a coworker outside calling, Pete?? So I got them to call the elevator company to come rescue me. Anyway because of the crazy rain and lightning causing traffic problems they said it was going to take about 40minutes to get someone out to me.
So after 1 hour of sitting around sweating like crazy the guy finally came and reset everything and I was able to get out. Don't think I'll be using the lift again anytime soon.

Next on the ride home in the pissing down rain and lightning flashing all around, I decided I should stop at American Village to try and shoot the big Farris wheel with hopefully some nice lightning behind it. So I set up my camera and waited for about 30mins just taking random exposures but not getting anything worth keeping. The vary second after I decided to give up and switched the camera off there was a HUGE multiple strike exactly next to the big wheel which would have made for a perfect composition and a great shot. I swore very loud.
After another 15 or so minutes of waiting I gave up and went home.

I did however manage to get a shot I was quite happy with from work as the storm was just forming. So it wasn't all bad 8) Shot with Nikon D700. Possessed with Silver Efex Pro, Lightroom and Photomatix
Heres another cloud shot from a couple of days before also shot just near work at Cape Zampa in Yomitan. Shot with Nikon D700 and 24mm tilt/shift lens
Heres one of a storm a few days ago rolling over our chapel at work. Shot with Canon 1D MKIII
And one last one of a huge one also shot from work. 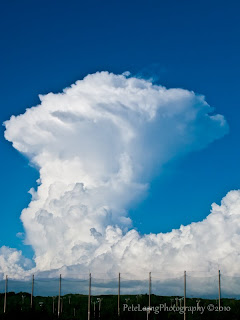