Skip to main content
Labels
Posted by Pete. A.K.A Shenanigans in Japan August 10, 2010

Hey Gang! So the family is away for a month back up in Fukukshima visiting the family up there. So I'm home all by my lonesome for a month and am really lazy when it comes to looking after the place, and myself for that matter!

Anyway its summer here right now and the air fares to Okinawa are super expensive, work is pretty quiet with only 5 confirmed weddings that I'm shooting this month. So I thought it would be a good time to explore a bit more of this amazing island. 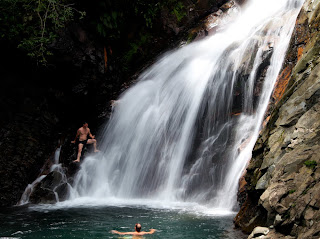 I recently took a trip right up to the very northen tip of the island to Cape Hedo with a quick stop along the way to check out Hiji waterfalls.
Half way between Nago and Cape Hedo, this beautiful waterfall is about a 30 minute hike from the car park up and down numerous steps. Once arriving though the water just begs to be swam in even though there are signs posted all over the place stating that swiming is not allowed.
Moving right along to the Cape it self. There are some pretty amazing cliffs all around the area. And some really interesting rock formations.
Heres a couple of shots of the area. 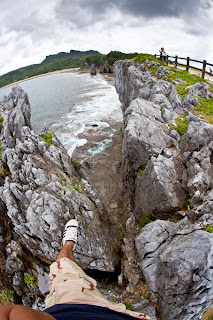 Getting a closer look down this gaping V in the cliffs. 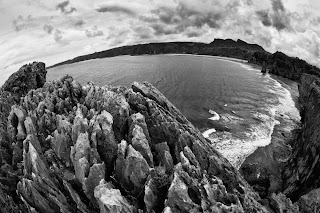 These pinnacles of sharp rock were crazy difficult and very dangerous to walk on. One slip or a wrong step and you would probably be bleeding profusely before you knew what happened. 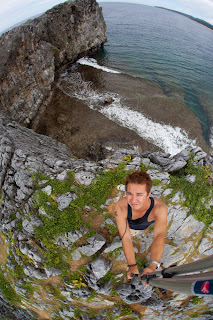 Trying to get something a little different for a self portrait.
On the drive back down the coast and pretty much in the middle of nowhere I came across something or someone which may just have been the single most interesting aspect of the day.
Behold the crazy Okinawa Dude in all his funky awesomeness! 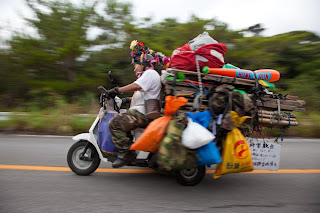 As I approched him from behind I was not sure what it actually was moving along the road at such a slow speed. Once I realized I sped ahead about a kilometer or so, pulled over and got my camera set up and waited... 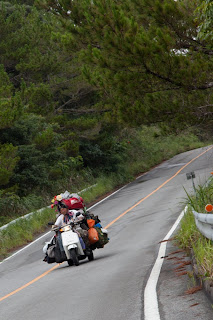 Sure enough after a couple of minutes I see him coming around the bend with all his collected goodies mounted on his tiny bike wobbling all over the place from the weight. He gave me a little nod and a smile and went on with his seemingly endless journey.
Several other people I've spoken to have mentioned they also have seen the same guy riding around the island with all this stuff. Makes me wonder if the cops ever pull him over and also just what it is hes doing anyway. Ok so thats a short summery of my little road trip to the very top of Okinawa's main island.
Coming up next is my report on my solo overnight camping trip to the beautiful Kerama islands. Stay tuned!