Skip to main content
Labels
Posted by Pete. A.K.A Shenanigans in Japan February 08, 2011

I had been wanting to try taking photos of thing dropping in water for quite some time so I bit the bullet and forked out a whole 1500yen on a fish tank and some fruit to get me started on my photo project. I had a basic idea of how I was going to set things up for the shoot.

I kept it pretty simple and just used one Canon speedlite with a small reflector on the other side of the tank and some light absorbing black background material.

Here's a few of the results from my first test. 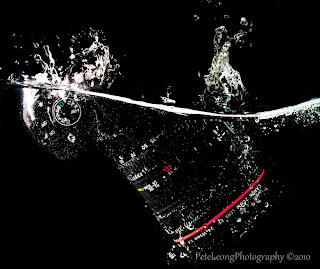 What am I doing dropping a camera, right? Actually Its a money box that looks like the Canon EOS 550D. I bought it just to try this. 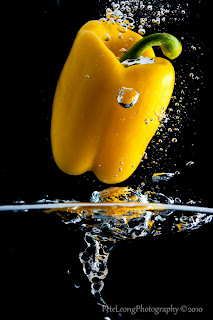 Dropping some Capsicums then flipped the image 180 degrees. 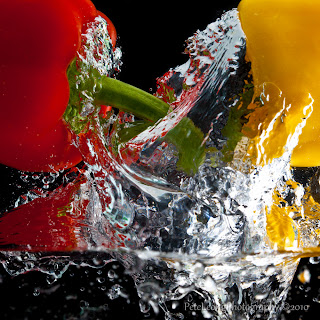 Its amazing the detail that can be captured with the Canon EF100mm 2.8 macro. 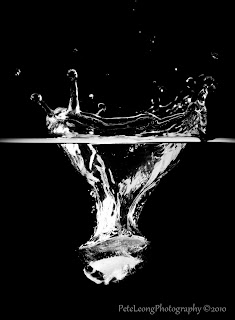 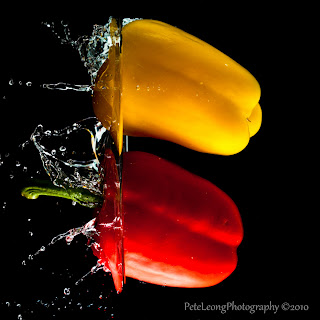 Tandem droppage flipped sideways (yes I made up that word)
Here's a behind the scenes shot of how I shot it.  I used the Canon 5D mkII with 100mm macro f2.8 attached. To fire the flash I used cheap radio triggers I bought from Linkdelight.com in Hong Kong. 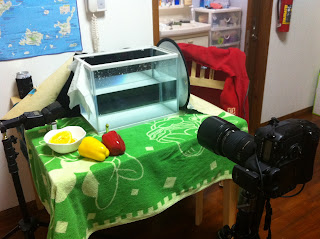 Usually someone always wants to know about exposure so I shot at iso200 50th/sec at f8 if I remember correctly. How did I manage to freeze the water splash at a 50th/second? The flash was in manual power set to about 64th/1 power. It was pretty dark so the flash acts as the shutter speed freezing the action at a crazy high speed.
I think it worked out alright for a first attempt. Its pretty good fun also but just have a few towels handy to clean up all the water that will get splashed on the floor if you try this for yourself. Happy Shooting!!
Labels: food photography photography water drops