Skip to main content
Labels
Posted by Pete. A.K.A Shenanigans in Japan April 18, 2011 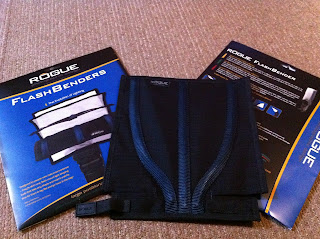 Recently its hard to listen to a photography podcast without them mentioning the new Rogue Flash Benders from Expo Imaging. So I thought I better find out what all the fuss is about.
The idea behind them being that they are a bounce card with bendable rods running through them so they can be shaped into all sorts of positions to "bend the light" from your flash.

They come in 3 sizes so I ordered a couple of the largest ones as I wanted to see if they would soften the light up and be quick enough to set up and use for my fast pace wedding shoots.
The first thing I noticed about them was the excellent build quality. They are not going to fall apart anytime soon even after some heavy use on the beaches and in rain. 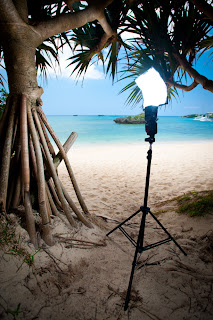 They do mount to my larger speedlights (Nikon SB900 and Canon 580 EXII) perfectly via the attached Velcro. But I did find on smaller flashes like the Nikon SB600 and SB800 that the fit was not quite as good. Also you will feel like a bit of a twit at first if you have your flash gun attached to the hot shoe on your camera with this large bounce card sitting high above that as you walk around nuking peoples eyes. It really does spread the light out over the entire white side making the small harsh light from the flash much softer as the size of the light has increased.

I found it particularly useful to use just as a little bit of fill and to give a nice catch light in the subjects eyes. Even possible with group shots outside the chapel etc..

The only other downside to using this large Flashbender that I noticed was that if move about quickly the flash head will just flop down at its tilting section from the weight of the attachment. Its not a major problem though and only happens if I'm rushing about too much.

All in all I really love these things. They are great for when you need to work quickly. If I have more time I would probably just go with my shoot through umbrella or small softbox set up as they can of course spread the light out even more to make it softer but when time is of the essence I will throw on a Flash Bender every time. Oh by the way I almost forgot, they can also be rolled to make a snoot for throwing a very narrow beam of light just in one spot!

The best place I found to buy these were on Amazon.com. I first checked on Amazon.co.jp which is my local Japan Amazon where the prices were a crazy 7,800yen (about $94US) for one large FlashBender. Then I checked Amazon.com in the States where they were only $39.95US plus $10 for shipping all the way to here on Okinawa, Japan. And whats more they arrived just a few short days after I ordered. Faster than I have received things from mainland Japan before!
What the hell is that all about??? Amazon Japan should be ashamed of themselves. But anyway I'm getting off topic now.

So in conclusion I give them 2 thumbs up! I will post some actual test shots maybe on my next day off so you can see the difference of the bare flash vs. with the large FlashBender.

To find out more about the product check them out at ExpoImaging here
That's it for today. Enjoy the rest of your weekend!
Labels: bridal photography FlashBender flashes Rogue strobist

Robert Mallon said…
Excellent review. I think I'll be picking a couple of these up for myself now.
9:01 AM

Pete. A.K.A Shenanigans in Japan said…
Thanks Rob glad you liked it! Yeah I'm really enjoying working with these!
11:45 AM

DFelix said…
I just received the large flash bender and would like some tips on how to use it indoors (Church, at home).
12:40 PM