Skip to main content
Labels
Posted by Pete. A.K.A Shenanigans in Japan August 08, 2011

What better way to kill time during a 3 day typhoon than to get together with photographer buddies in a studio to play around shooting each other. Michael Taylor and I went over to Chris Willson's place to try out a bit of a boxing theme just for a laugh. For all the shots we used the wobbly head technique which involves one shaking their head vigorously from side to side to create a punched in the face look when captured as a still image.

We all took turns shooting and being the boxer and the "boxee". Here's one of my favorite shots of Chris taking a very powerful looking right jab to the head by Michael. I used Lightroom 3, a preset called 300 and some personal adjustments to achieve this look. To give the effect of sweat flying off we used a water spray bottle before each shoot to allow it to splatter off when we shook out heads. 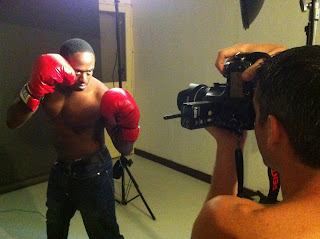 Michael Taylor one the other side of the glass, totally looking the part.
We found it to be super tricky to get the timing right and have the face looking as though it was being punched in the correct direction. There were so many great facial expressions but most of them were not in the right orientation from the punch.
Here's a couple Michael shot of me that I think are pretty funny. 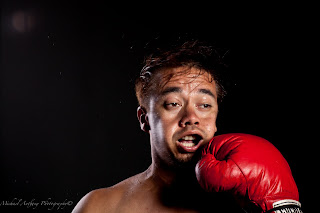 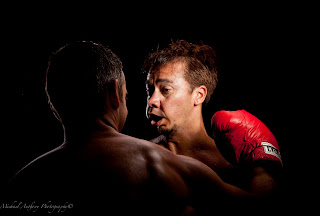 These were lit with 3 studio lights, 2 strip boxes and a gridded beauty dish.
Just goes to show, being stuck indoors for extended periods with nothing to do can really force you to bring out some creativity.