Skip to main content
Posted by Pete. A.K.A Shenanigans in Japan April 29, 2012

New Lowepro bag and other gear 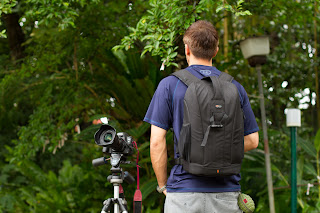 Recently picked up some new photography related gear to play with when not shooting weddings. First off I got myself a new Lowepro camera backpack. The Flipside 300 is a nice and compact pack for day outings with just one body and up to say 2 or 3 lenses. The cool thing about this pack is that it can not be opened from the outer side of the pack so there's no need to worry about thieves getting into it while in crowded areas. Another cool point is the fact that you can have the bag open so that you can get to lenses etc.. hands free while still wearing it! 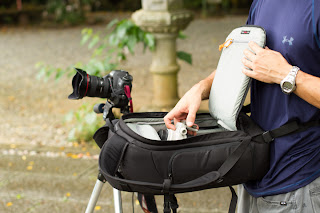 That simply works by using the belt strap and sliding the pack around to your front and it sits nicely in balance even with heaver lenses like a 70-200 f2.8 making it great for lens changing in wet conditions like I had this day, or just any unstable ground where you couldn't put a bag down.

It has extra pockets and pouches for spare batteries, cables etc.. and a handy little flip out tripod pouch that tucks into the bottom of the bag.

The bag is very comfortable to wear and if you tighten down the straps you can even run with it as it doesn't shift around like bigger packs would. It also holds up very good in the rain as I found out riding home in a heavy downpour. I was drenched but not a spot of water inside the bag.

A couple of other bits I got also were the Westcott Apollo Orb softbox along with a Manfrotto light stands, umbrella mounts and some new cold shoe mounts to try as I'm tired of using really cheap ones only to have  flashes fall out of them and crash to the ground.

Until I got these I was mostly just using cheap lighting gear from China as it is super cheap and gets the job done for the most part. But the cheap gear can get super annoying while on a shoot and your trying to concentrate on shooting but at the same time worrying about if my $600 flash is going to fall over any second.

The Orb is very quick and easy to set up thanks to it's umbrella style folding method. It also does not need any kind of speed ring like most others need to mount the flash. The Orb just attaches through the regular hole in the umbrella mount.

The only downsides I see so far are that you can't adjust the angle of the Orb up or down too much as the light stand goes through the bottom of the box. But if you want to get some serious angles it's light enough for an assistant to hold it out using the stand as a boom no problem. Working alone with it would be tricky outdoors in windy conditions. Even with a weight attached to the stand I think this would be falling over pretty quickly.


Here's a little preview from a recent couples shoot I did in American Village. My good assistant David Orr was holding the Orb high to the right for this shot. Very pleased with the soft light it puts out and the nice round natural looking catch lights it produces.
(More on this couples shoot in a coming blog post)


I had never heard of these until a fellow photographer here on the island was using one on a shoot we did together. They seemed like such a great but simple idea. The big problem with some other flash mounts is that if you don't tighten them down onto your flash trigger or strobe well enough they can easily allow your flash to slide out during shooting when getting moved about. With the Frio though once you slide your flash trigger into the slot it locks into place and can not come out unless your squeeze the release plate blocking the trigger. I found this works quite well although longer triggers like these Yongnuo's below must be mounted with the long section pointing away from the release plate to avoid covering it. It would be pretty annoying I bet trying to get it off again if you accidentally put it on the wrong way. 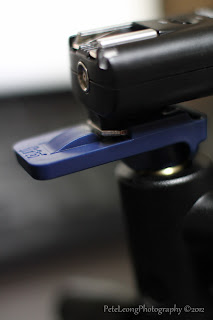 I wouldn't have minded at all shedding out the $14US for this little piece of plastic if it solved my flash mounting problems, which it almost does except part of the cold shoe mount that already broke off during a beach shoot I was doing on Miyako island. The Nikon SB800 that was mounted to it went crashing to the concrete path and batteries went flying all over. I thought it was the other cheap triggers I was using at the time but on closer inspection found the Frio had snapped under the pressure of the flash head. Luckily the SB unit still worked fine once it put all the batteries back in and reattached the battery cover panel.

It still works pretty fine but I'm not too confident to use it now. Well back to the metal screw types for now I guess.