Skip to main content
Posted by Pete. A.K.A Shenanigans in Japan June 13, 2012


It's not too often that I get the time to get out and shoot something other than wedding photography or the odd seascape/landscape or two. But I teamed up with fellow photographer and good friend Adam Lewis to try something a little wild at one of the many old abandoned hotels around Okinawa. 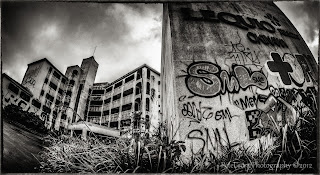 Our location for the shoot

We based the theme loosely around a couple of characters trying to kill each other in a variety of run down rooms and hall ways of this old abandoned building. Just exploring these old ruins here in Japan is quite a popular past time for many people. Here its known as "haikyo" or urban exploring.

These places are often hard to get into, very dirty and can be very dangerous. But they just ooze with atmosphere and beautiful textures can be found everywhere.

Adam and myself took turns setting up a scene to try an idea out on. At our disposal we had 4 or 5 speedlites and monoblock strobes, a few gels and my new Westcott Apollo Orb. We also used a lot of colored smoke bombs available where ever fireworks are sold (which is pretty much any shopping center or convenience store here in Japan), they only cost 100yen or so for a pack of 4 and work great for this kind of scene. They stink like S#%T though!
In future we plan to go back with some of my bodybuilder friends "characters" and and make something really really cool.

So without any further ado here are a few more samples from our Battle Royale shoot. 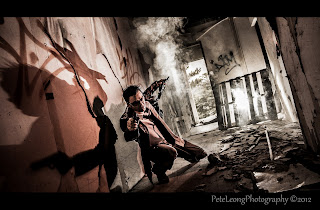 One of my first scenes I set up with Adam looking pretty bad ass.
We had our fair share of technical difficulties with flash triggers
not firing and lighters not working to light the smoke bombs. 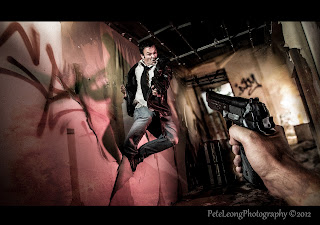 Got Adam to try and get up high on the wall for this one.
He almost went through the wall on a few of the tries as the place is falling apart. 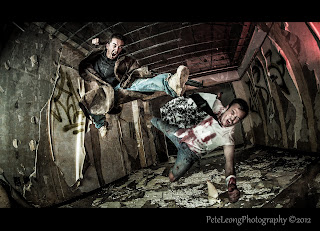 Kind of like the finishing scene as my character kicks the bad ass rouge cop onto a nasty spike on the ground. This took a whole bunch of attempts to get everything looking right. I used my old rock climbing impact mat for Adam to crash onto then removed it for another frame so it could easily be removed in post.
Adam still came away with some nasty neck pain. Welcome to the club mate! 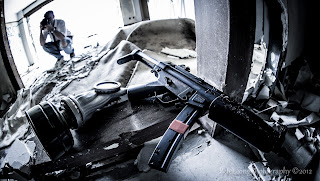 A little behind the scenes shot of a couple of the props we were using. The gas mask I ordered from Russia on Ebay and Adam picked up the MP5 BB gun from a hobby store here on Okinawa. 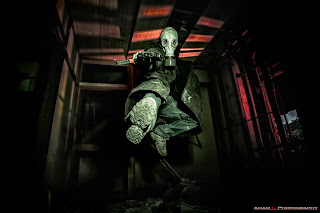 Another shot by Adam of me gettin my kill on.
Super hard to breath while wearing the gas mask. Jumping up and kicking numerous times was pretty hard work. At least it filtered out the horrid smell of the smoke bombs.

Adam is also working on some crazy awesome 3D like video effects for these images. Check out more on his site here. http://www.bluepacificmedia.com/

ADAM L said…
Great post matey..that was a great shoot...can't wait to have another dig at it!
8:51 PM

Michael said…
Absolutely inspiring photography! I just got back from an Okinawa haikyo trip myself and visited Lequio. I love the approach you guys took to shooting some really unique images. :D
5:12 PM

Pete. A.K.A Shenanigans in Japan said…
Thanks chaps! Michael yep theres some great places to explore around here! cheers!
2:00 PM