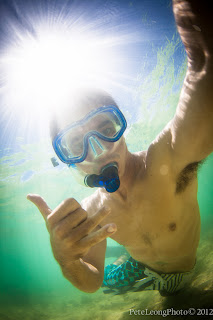 Since moving down here to beautiful Okinawa and having so many beautiful beaches and clear blue waters to explore I have been wanting to try my hand at shooting underwater photography. In the past I have used a few of my Canon point and shoot cameras with various underwater housings like the Dicapac and Canon's housing for the S95. Although these were fun and I even had one image published as a double page spred in Outdoor Japan magazine, but they are quit limited in terms of overall speed, focusing and image quality. So decided to take the plunge and invest in an Ikelite housing for my Canon 5DmkII and Canon 8-15mm f4L fisheye lens. The housing itself was not cheap to begin with at around $2000US then combine that with the 8 inch dome port necessary for shooting with the fisheye lens adds an extra $500~$600 on top of that and it still doesn't stop there.
There attachments needed then a case to keep it all in. Underwater flashes etc.. it all adds up.
To start with however I opted to not buy any flashes as I plan to mostly be shooting with the housing at very shallow depths. Im mostly interested in shooting Sea turtles, "split shots" i.e half underwater and half above and underwater portraits/couples. 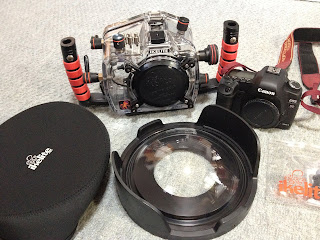 When the housing arrived it was seperated into a few parts that needed to be put together. Having absolutly no idea what I was doing I got help from good friend and great underwater photographer Shawn Miller. Shawn went through the set up procedure and things to be carefull of before putting my expensive camera equipment in places it wasn't designed to go.

Here is the rig all assembled with the end of the Canon 8-15mm f4L visible
in the massive 8 inch port dome. HEAVY! 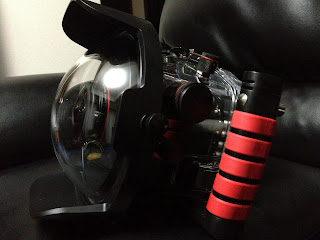 So we took the housing out for a test run in the shallow reef at Maeda for a test run.
Heres one of my first attempts at making a "split" with this big brain coral. 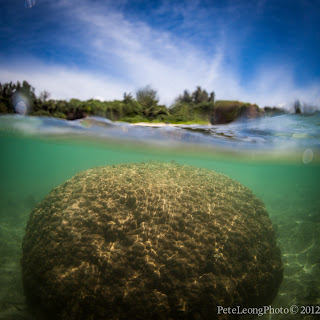 Although the housing is crazy heavy when its loaded up with the camera, its actually almost perfectly neutrally buoyant. So its very easy to hold once your in the water.
For this shot I wanted to try and catch the sun shining down through the water. These little black & white fish were not scared and happy to keep swimming around in front of the camera for me. 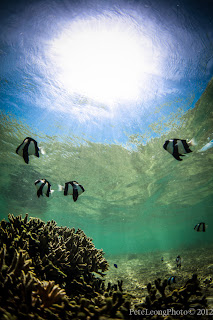 There are still lots of things to get used to with the housing, like becoming more familier with all the buttons and dials etc.. Also being a fisheye I found that I really needed to get really close to the fish otherwise they would appear too small in the image. But at the same time being very careful not to smash that huge front element into some sharp rock or coral.

One small annoying problem I found was when I try the split shots or shooting above the water line there are lots of droplets of water still on the front element leaving blurry patches in the image. There must be something I can apply to the front of the port dome to prevent this I would imagine. Perhaps something similar to whats used on car windshields so any water runs straight off for sharper images.

Overall I am loving it so far and think it was a good investment. Looking forward to trying it out with some models and couples soon. But first I need to get some flood insurance!
Labels: Okinawa Underwater photography