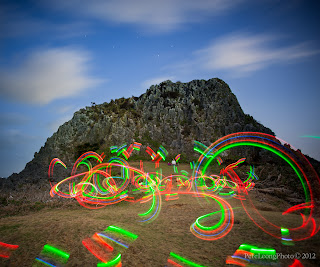 Had a super busy day yesterday shooting a bridal beach location shoot first thing in the morning then straight into wedding, another beach shoot and party after that. When ever possible I like to get out and photograph a little something for myself to unwind. It's refreshing to shoot with "no rules", don't have to worry directing poses, blinking, fast lens changes and all that stuff that goes along with the hectic pace of wedding photography. Just take my time, hang out with a few good mates and see what images come of it.

In the above shot Jenna and myself ran around all over the place swinging around an LED wand that I bought at a recent festival here in Yomitan. I thought it would be fun to use for some light painting but Jenna claimed it as her own pretty quickly. In the far background at the base of the rock you might be able to see a woman in white sitting perfectly still. She wasn't visible at the time as it was totally dark. But in this 130 second exposure she's there clear as day and perfectly still. I guess she was doing a little unwinding herself. 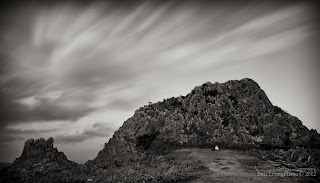 As we arrived at Maeda and set up to shoot all the clouds disappeared and we were left with a clear boring sky. Great if you want to do star trails but I was after some cloud movement. Luckily some clouds reappeared and were moving pretty quickly so I made this one. Another 130 second exposure. Again the woman in white is perfectly still and sharp during the whole exposure. Weird!

Thanks for dropping by!
As usual please drop by my fotoShisa photography page on Facebook and give a "thumbs up"! 8)
https://www.facebook.com/pages/fotoShisa-Photography/485182428164295?ref=hl